Only one of the Abydos royal enclosures is still standing above ground today, that of king Khasekhemwy of the 2nd Dynasty (ca. 2650 BCE), the last king buried at Umm el-Qa’ab at Abydos. His enclosure was the most massive and the most elaborate. Known locally today as the Shunet el-Zebib, it is the largest surviving representative of Egypt’s earliest royal monumental building tradition. In addition, Khasekhemwy’s enclosure has additional significance in the development of the architecture of the royal pyramid complex in Egypt, and influenced the design of the Step Pyramid complex of Khasekhemwy’s successor king Djoser, the first royal pyramid built in Egypt.

By modern times Khasekhemwy’s great monument, built of sun-dried mudbricks, though still dominating the desert landscape at Abydos, had suffered much from the effects of its nearly 5000 years of exposure. Although most of its walls still rise to near their original height of 35 or so feet, significant sections had collapsed, some were heavily undermined by animal burrows and in danger of catastrophic failure, huge cavities existed in others, threatening further major collapses, and most of its walls were riddled with smaller holes created by nesting insects. Without intervention, the only surviving royal enclosure at Abydos would likely not survive. The Institute of Fine Arts responded with the initiation of a multi-year program for the comprehensive stabilization and conservation of the monument, with major support from Egypt’s Ministry of State for Antiquities, the American Research Center in Egypt (with funds provided by the United States Agency for International Development), and the World Monuments Fund.

Working with experts in architectural conservation and earthen architecture, the Institute’s conservation program uses the same basic materials and methods as those used in the monument’s construction nearly 5000 years ago. New mud bricks, of the same size and constituent materials as the originals, are used to replace missing sections of original masonry that create structural instabilities. Conservation interventions are designed to maintain the monument’s existing character, the result of its long history, not to overlay and fundamentally alter it with modern restorations.

Approximately half of the needed conservation work has been completed as of 2009, and several years of work lay ahead. Ultimately this great enclosure will be completely stabilized and conserved and should survive indefinitely, so long as effective site management is maintained. 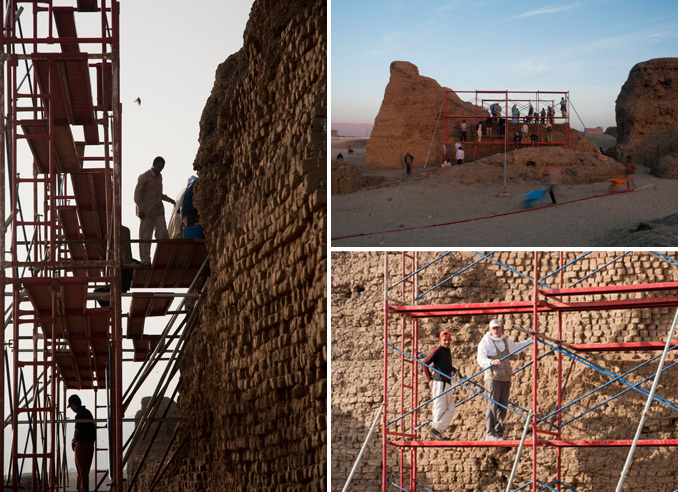