Welcome to the Medieval Art Forum!  The Forum presents opportunities for discussion and exchange on topics of current interest to medieval art study.  All media, all periods, and all approaches are represented. Curatorial and conservation issues are also on the agenda, so as to take advantage of the exceptional resources of New York’s medieval collections, particularly those of the Metropolitan Museum, and of the Institute’s Conservation Center.  Events include traditional lectures and symposia, but the Forum organizes also discussions around pre-circulated papers, round tables with guest scholars, and works-in-progress.  Most of our events meet in the Institute’s seminar room, although the Forum’s collaborations with New York University’s Medieval and Renaissance Center (MARC) will occasionally bring events to NYU’s Washington Square campus.

Please check the events schedule for upcoming lectures in this series.

Mozarabic and Romanesque are disparate kinds of historical categories rarely considered together: they are not only separate groups of buildings with divergent stylistic traits, but also very different kinds of classification. Mozarabic names a demographic group and carries ethnic implications, while Romanesque is an immense category of buildings defined stylistically and conventionally seen as the expression of a nascent Europe. Dr. Dodds proposes to see these two groups in a more connected way as we explore how these categories shape the canon, and our own interpretations.

Jerrilynn Dodds is Harlequin Adair Dammann Chair in the History of Art at Sarah Lawrence College. Prof. Dodds' scholarly work has centered on issues of transculturation, and how groups form identities through art and architecture. Among her publications are: Arts of Intimacy: Christians, Jews and Muslims in the Making of Castilian Culture, co-authored with Prof. Mara Menocal and Abigail Krasner Balbale; Architecture and Ideology of Early Medieval Spain; and New York Masjid, the Mosques of New York City. She was editor of the catalogue Al Andalus: The Arts of Islamic Spain (Metropolitan Museum of Art); co editor of The Arts of Medieval Spain (with Little, Moralejo and Williams, Metropolitan Museum of Art); Convivencia. The Arts of Jews, Christians and Muslims in Medieval Iberia (ed., with Glick and Mann, 1992); and, with Edward Sullivan, Crowning Glory, Images of the Virgin in the Arts of Portugal, ( Newark Museum), and co-curator of these exhibitions. She has curated a number of exhibitions and written and directed films in conjunction with museum exhibitions Journey to St. James (MMA); An Imaginary East (MMA); NY Masjid (Storefront) and for wider audiences (Hearts and Stones: The Bridge at Mostar). She will serve as the Slade Professor at Oxford University in 2020-2021. Professor Dodds is the recipient of the Cruz de la Orden de Mérito Civil (Cross of the Order of Civil Merit) from the Government of Spain (2018).

Abstract: Made during the Carolingian Renaissance, the Drogo Sacramentary (Paris, BnF latin 9428) is famous for its history – it was commissioned between 827/836-855 by Drogo, Charlemagne’s illegitimate son, bishop of Metz and great patron of the arts – and for its refined and sumptuous decoration that consists of several illuminations throughout the text and of eighteen ivory plates fixed on an 18th-century binding. The iconography of the illuminations and that of the sculpted ivory plates are very close, but the wrong order in which the ivory plates were reassembled during the modern era has made it difficult to understand the Christological and liturgical context of the scenes in the light of the Christian typology. Recent support from the King Baudouin US Foundation for conservation study, however, has now yielded major discoveries about the original order of the plaques, about their origin, and about the meaning of their iconography in relation to the manuscript. The lecture will focus on the different steps of the restoration and those discoveries. 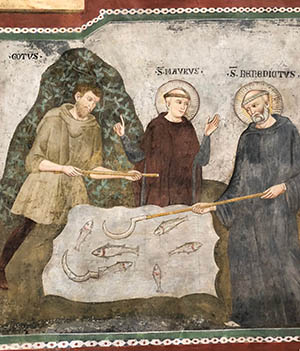 Abstract: Medieval Latin Christianity harbored at its core a paradox in terms of the presence of the sacred in the world. On the one hand, the natural world and all it contains were God’s creation; in this sense divinity inhered within. On the other hand, specific locations were constituted as nodes of concentrated sanctity, primarily through human activities that summoned, witnessed, or were abetted by the divine. Processes of Christianization are typically understood through this latter anthropological lens: the arrival of holy persons, the teaching of Christian history and principles, the construction and embellishment of churches and related structures. As recent research in history, literature, and art history has shown, ecological considerations were also very much present in representational strategies, sites, and materials. This talk explores the exchange between humans and nature in the sanctification of the Italian peninsula using as a heuristic the miracles presented in the Dialogues of Pope Gregory I (d. 604), one of the most widely distributed texts of the early Middle Ages. The talk highlights the ways in which this text harbors traces of an ecological understanding of sanctity and examines the translation of that understanding into the representational art of medieval Italy, primarily wall paintings, manuscript illuminations, and architectural sculpture. The talk centers around two case studies that themselves express this tension: the life of Saint Benedict and miracles involving water and fish. 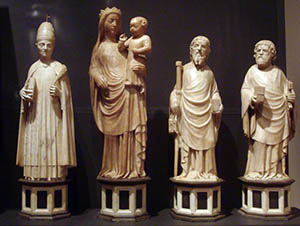 Abstract: The Franciscan basilica of Sant’Antonio in Padua is known above all for its architecture and its pictorial cycles. The sculptural decoration of the monument has been much less studied. Among the overlooked works is the altarpiece carved in 1379 by Rainaldino di Francia for the altar of the chapel of San Giacomo, founded by the Lupi family, and of which there are now four original statues in the Museo Antoniano. According to the contract, the altarpiece had to follow the model of the one existing on the main altar.

Rainaldino’s work has to be considered in the complex history of fourteenth-century Italian sculpted altarpieces. This lecture shows how the first marble altarpieces were created, not coincidentally, for patrons of French culture, and how the spread of this typology was then favored by a game of emulation or rivalry within the Dominican and Franciscan orders, and how the genre transformed by constant comparison with its pictorial equivalents. The Rainaldino altarpiece will thus be the starting point for a broader reflection on patronage, cultural transfer and artistic exchanges in Trecento Italy. 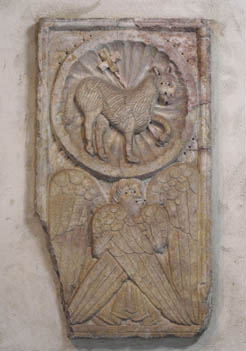 Abstract: The acquisition of Romanesque art by American collectors and museums was most active in the early decades of the twentieth century. Early collectors such as Isabella Stewart Gardner, J. Pierpont Morgan, George Grey Barnard, and Arthur Kingsley Porter were influenced by their exposure to European monuments and the desire to establish a cultural equivalence in the United States. Parallel to the growth of U.S. museums, major universities fostered the scholarship of medieval art, with Meyer Schapiro writing the first dissertation in the U.S. on a Romanesque topic. The exhibition of architectural fragments in a contextual setting, such as The Cloisters, as well as increasingly ambitious museum exhibitions brought Romanesque art to broader audiences. No longer limited to Americans who were able to travel abroad, Romanesque art now displayed in the U.S. would have a profound impact on generations of scholars, students and artists through to the present day. 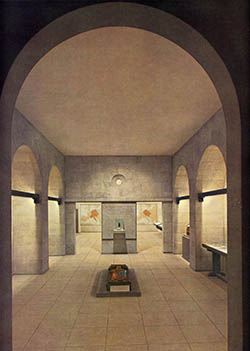 Abstract: Although it is not well known, the cultural-historical exhibition Deutsche Größe (“German Greatness” or “Grandeur”) was the most important museum display of the Nazi era. The show’s subject was the history of Germany from the early Middle Ages until the assumption of power by Adolf Hitler. Deutsche Größe was supported at the highest levels of the Nazi Party and its presentation of history was frankly ideological, but the show expressed that ideology through a series of ambitious and innovative display techniques. This lecture presents the exhibition, describes how it came about, and how it worked to shape an understanding of history that would serve Nazi goals. Special attention is paid to Deutsche Größe’s display of the art and culture of the Middle Ages, an area of history that was especially fraught and problematic for the National Socialists, and to the legacy of Deutsche Größe in several more recent German museum exhibitions (ranging in date from 1977 to 2006).

September 27, 2017
Speaker: Martha Easton, The Material Collective
Title: “The Most Extraordinary Art Museum in the World”: Inventing Medievalism at the Hammond Castle Museum in Gloucester, Massachusetts”