The Latin American Forum was created to bring artists, scholars, and critics of the arts of the Americas to The Institute of Fine Arts, providing a platform for discussions and debates of diverse issues pertaining to contemporary arts and visual cultures throughout the hemisphere. As a conversational space for the creation of knowledge, the forum aims to build bridges that allow for the exchange of ideas, resources, and methods within the field.

This forum is generously funded by the Institute of Studies for Latin American Art (ISLAA). This series of public programs and events are coordinated by Edward J. Sullivan, Helen Gould Shepard Professor in the History of Art and Deputy Director, The Institute of Fine Arts, New York University, and organized by graduate students. Since partnering with ISLAA in 2011, NYU’s Latin American Forum has hosted more than 30 events.

Please check the the events calendar for upcoming lectures in this series.

Description: This conversation celebrates the recent release of Hans Ulrich Obrist & César Paternosto Interview, published by Manuella Editions with the support of the Institute for Studies on Latin American Art (ISLAA). In this interview directed by Hans Ulrich Obrist with an introduction by Lucy R. Lippard, César Paternosto revisits his career as a painter with passion and sincerity. From his beginnings with Art Informel, to his development of a radical geometric abstraction up to his most recent works of public art and experiments with the pictorial support, Paternosto narrates his lifelong commitment with abstraction. An abstraction also crucially influenced by his involvement with the ancient arts of the Americas, on which he also has written extensively.

Hans Ulrich Obrist (b. 1968, Zurich, Switzerland) is Artistic Director of the Serpentine Galleries in London. Prior to this, he was Curator at the Musée d’Art Moderne de la Ville de Paris. Since his first show, “World Soup (The Kitchen Show)” in 1991, he has curated more than 300 exhibitions. Obrist has lectured internationally at academic and art institutions, and is a contributing editor to Artforum, AnOther Magazine, Cahiers D’Art, and 032C; he is a regular contributor to Mousse and System Magazine, and he writes columns for Das Magazin and Weltkunst. In 2011 he received the CCS Bard Award for Curatorial Excellence, and in 2015 he was awarded the International Folkwang Prize for his commitment to the arts. His recent publications include Ways of Curating (2015), The Age of Earthquakes (2015), Lives of the Artists, Lives of the Architects (2015), Mondialité (2017), Somewhere Totally Else (2018), and The Athens Dialogues (2018).

César Paternosto (b. 1931, La Plata, Argentina) is a painter, sculptor, and theorist. Paternosto lived in New York between 1967 and 2004, when he moved to Segovia, Spain. At the beginning of the 1960s he embraced abstraction at a time in which painting was still the cutting-edge art. It was in New York in 1969, however, that he conceived a radical “lateral vision” of painting that brought the pictorial notations to the side edges of the picture. Toward the end of the 1970s an encounter with the ancient arts of the Americas led him to pursue systematic research on the eccentric origins of abstraction in non-European cultures, about which he later wrote, published (The Stone and the Thread: Andean Roots of Abstract Art, 1996), and organized exhibitions (most notably, Abstraction: The Amerindian Paradigm, 2001). All along he has continued developing pictorially, as well as intermittently in sculpture, these foundational principles of his work.

The evening features talks by two of the top scholars in the field: IFA alumni Dr. Anna Indych-López, Professor of Latin American and Latinx Art, The Graduate Center and The City College of New York, CUNY, and Dr. Lynda Klich, Assistant Professor of Art History, Hunter College, CUNY, who will each discuss their latest research on Mexican Muralism and its unexpected correlations and traces. The presentations will be expanded upon through a conversation led by Madeline Murphy Turner, Ph.D. Candidate, The Institute of Fine Arts.

The event will be followed by a reception.

LEARN MORE about the Musical Homage to Roberto Burle Marx

Description: This panel is held to discuss and celebrate the multifaceted art of Roberto Burle Marx (1909-1994), master garden-architect, painter, sculptor, designer, musician. Burle Marx was directly involved with virtually every avant-garde movement in Brazilian modernism in the mid-twentieth century. Panelists will discuss various facets of his work as well as international connections with other parts of Latin America and beyond. Burle Marx is currently the subject of a major exhibition at The New York Botanical Garden (until September 29).

LEARN MORE about the Musical Homage to Roberto Burle Marx

Description: This concert coincides with the exhibition BRAZILIAN MODERN: THE LIVING ART OF ROBERTO BURLE MARX on view at the New York Botanical Garden until September 29. Burle Marx was an extraordinary figure within modern Brazilian culture. He was a master garden-architect, painter, sculptor and designer. Much less well known is the immense significance that music played within both his youth and maturity. He trained as a young man for a career in opera and well into his late life he played piano and guitar. Growing up in a German and Portuguese-speaking household of intellectuals, he was deeply immersed in the repertory of German 19th century musical classics, and had a great love of modern classical and popular music from Brazil. This concert will feature works by the composers known, loved and played by Burle Marx.

Tyrone Whiting is a prize-winning British conductor, organist, pianist, and teacher. Currently, Director of Music at the historic Grace Church in Newark, NJ, Tyrone has performed throughout the UK and USA. He has chosen a wide-ranging repertory for this event, evoking the varied musical tastes of Burle Marx. More information about Tyrone can be found at www.tyronewhiting.com 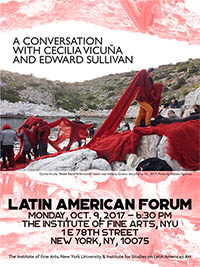 Abstract: Artist, poet, activist and philosopher, Cecilia Vicuña (born in Chile, a long-time resident of New York) has been noted for many decades for her work in a wide variety of media and venues. Her political activism, her artistic innovation and her stimulating and original approach to problems of visuality and the expression of collective emotion are at the heart of her art.

We are immensely pleased to have Cecilia as the first Artist in this Fall's series of Latin American Forum events. She will discuss her work in the context of a conversation with Edward J. Sullivan, Professor of Latin American and Caribbean Art History and Deputy Director of the Institute of Fine Arts

May 11, 2015
Jaime Davidovich: Pioneer in Video and Conceptual Art


November 18, 2014
A Conversation with Marta Chilindrón and Edward J. Sullivan