The Institute is pleased to present its spring show, Posture, featuring new work by New York-based artist Xaviera Simmons. The exhibition proudly continues a commitment to present the work of mid-career women artists at the Institute’s James B. Duke House. Encompassing video, photography, performance, installation, and sculpture, Simmons’ sweeping aesthetic practice is rooted in the interconnectedness of formal processes, rigorous archival research, and the concept of social and material reparations for ramifications of colonialism with whiteness as its center. Set within the context of the James B. Duke House, an institutional building that was once the private home of the president of the American Tobacco Company, the sculptural works in Posture navigate the complex relationship between art objects and the space in which they are exhibited. Rather than complementing the architecture of the Duke House, however, these works comment on the building’s historical origins while challenging traditional viewing expectations. 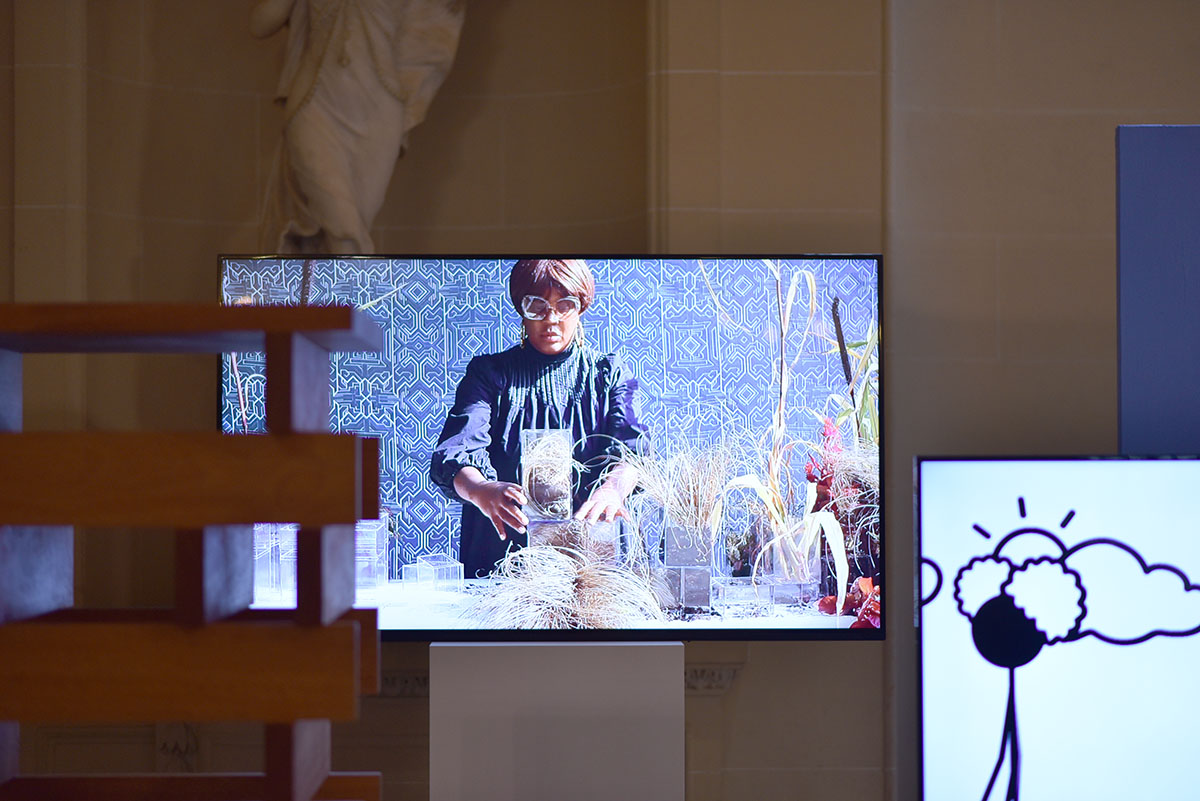 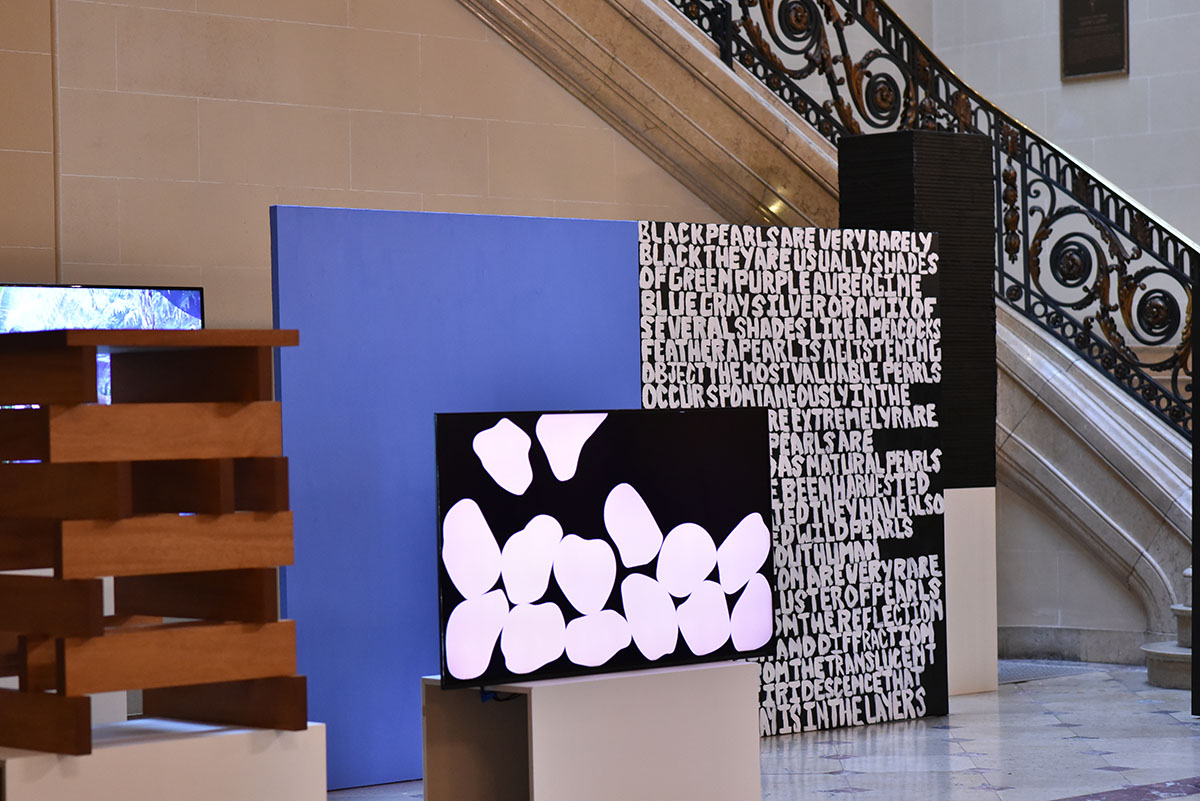 Much of Simmons’ work in this exhibition aims to recuperate a missing or invisible historical narrative of Black artistic production stifled by what she describes as “centuries of historical disenfranchisement by white America on the interior, imaginative, and physical lives of Black Americans who have descended from American chattel slavery.” Simmons, whose practice relies on intensive research, borrows gestures and techniques from previous art historical movements while “inserting the presence of the Black American creative” where it has previously not been fostered or permitted. Her work imagines alternative histories while pointing to the multi-racial lineage built into the American caste system, in which “blackness” is understood in opposition and as inferior to “whiteness.”

The works in Posture emerge in part from Simmons’ reflections on canonical sculptors of the twentieth century and her increasing interest in both monumental sculpture and its relationship to architecture. She has been particularly inspired by her visits to the Atelier Brancusi, a structure built on the plaza of the Centre Georges Pompidou in Paris, that evokes one of Constantin Brancusi’s workshops. Beginning in the 1920s, Brancusi examined the changing formal relationships between his sculptures and his studio environment in hundreds of photographs. Engaging with the concept of an artist’s studio as a space of experimental creation and careful staging, Simmons transforms the skylit lobby of the Duke House into an artist’s atelier.

A central component of this installation is the pedestal, an element that Simmons has introduced into her practice in recent years. Both a method of display and often at times treated as a sculptural form in its own right, the pedestal traditionally serves to contextualize objects as works of art both in institutional and domestic spaces. For Simmons, the plinth or pedestal signals a turn to sculpture and architecture. In her Platform exhibition Chord at the 2019 Armory Show, she fabricated unconventional plinths to support a new body of photographs, arranging pieces of African mahogany into complex geometric structures. In Posture, she turns her attention to the modern museum pedestal—a simple, often white, rectangular form—and positions her sculptures, paintings, and video works on and amongst them. One plinth supports a stack of painted canvases that towers over the installation and extends upwards to the ceiling. Another plinth offers support for a miniature spiral staircase that visually echoes and comments on the sweeping, grand staircase of the Duke House immediately behind it. Others display small sculptures and strips of carpeting that express both the sensual and the industrial. Also on view is the two-channel video Capture that combines images of human bodies with images of natural and built environments. Seeking to maximize all aspects of the viewing experience, Posture oscillates between the experimental, the formal, the studio, and the language of exhibition making itself.

Xaviera Simmons (b. 1974, New York) lives and works in Brooklyn, NY. She received her BFA from Bard College, Annandale-on-Hudson, NY (2004) and completed the Whitney Museum’s Independent Study Program in Studio Art (2005) while simultaneously participating in a two-year actor-training course at The Maggie Flanigan Studio, NY. She is a recipient of Socrates Sculpture Park's Artist Award (2019), Agnes Gund’s Art for Justice Award (2018), as well as Denniston Hills’ Distinguished Performance Artist Award (2018). In addition to her numerous residencies, fellowships and lectures, Simmons has exhibited nationally and internationally. Her work has been exhibited at the Museum of Modern Art, New York, the Studio Museum in Harlem, New York, and the Contemporary Arts Museum, Houston. Recent solo and group exhibitions include SculptureCenter, Long Island City, Harvard University, Cambridge, and the Museum of the African Diaspora, San Francisco, among others. Simmons is a 2020 visiting lecturer and the inaugural Solomon Fellow at Harvard University.

This exhibition was made possible through the generous support of Valeria Napoleone XX. Additional support provided by David Castillo Gallery. Special thanks to the artist for lending the works on view, and to the Swiss Institute for providing exhibition materials. The exhibition is curated by Makenzi Fricker, Scout Hutchinson, Deborah Miller, and Juan Gabriel Ramírez Bolívar.