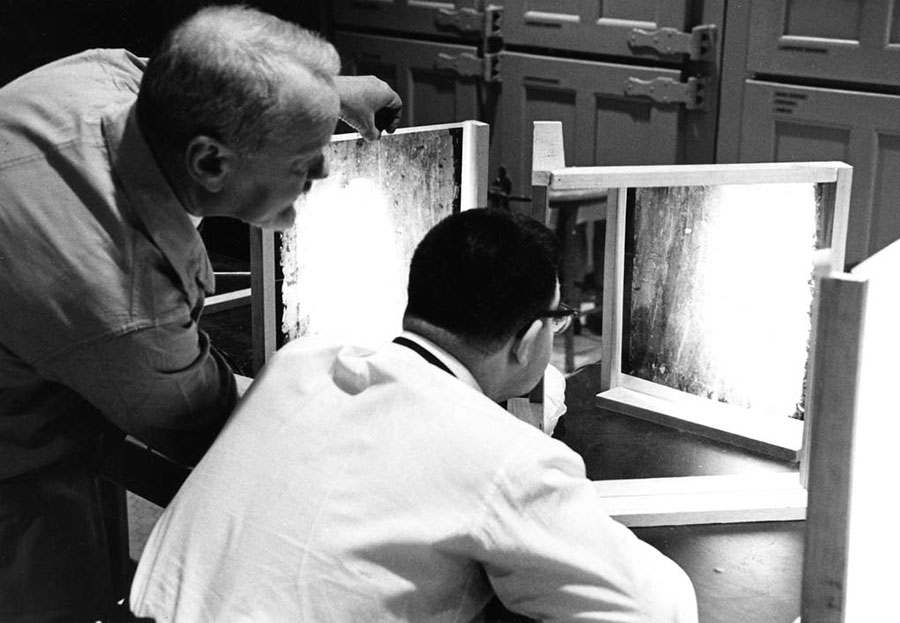 Richard Stone (M.A. 1966, ABD), conservator emeritus of The Metropolitan Museum of Art and a member of the adjunct faculty of the Conservation Center of the Institute of Fine Arts for nearly 30 years, died peacefully at home on November 15, 2021, after a long illness.  With him was his beloved wife, the historian of Indian art, Elizabeth Rosen Stone (M.A. 1970, Ph.D 1983), whom he first met in Erwin Panofsky’s class at the Institute in the 1960s.

Richard – or Dick, as he was known to many of his friends and colleagues – was one of the leading authorities on bronze casting technologies in the pre-modern era.  His research towards the doctorate on the North Italian sculptor Pier Jacopo Alari-Bonacolsi, called Antico, led to a ground-breaking article on the bronze casting techniques of the artist in 1982. This article was one of many influential publications that greatly expanded our knowledge of bronzes and metal working, East and West.  Dick’s depth of knowledge and expertise in examination and analysis were legendary.  He read widely, and had near-total recall, amazing his colleagues and students with full paragraphs of information on the most obscure materials. I remember once talking with Dick about an unusual dark purple fluorite that I had identified in a pigment layer, and he immediately named a sixteenth-century treatise that mentioned its use.  Dick pioneered the use of radiography to study the methods of Renaissance bronze casting and could see things on an x-ray film that astonished lesser mortals.  He was a generous colleague, always ready to look at an object together, share his knowledge, and explain what he saw; he adored the puzzle that objects present, and this love was infectious.  Dick continued his research and writing until shortly before his death, finishing the final edits on the introductory essay, on technologies of bronze casting, for the forthcoming catalog of Italian bronzes in the collection of The Metropolitan Museum of Art.

As conservator in the Department of Objects Conservation at the Metropolitan Museum of Art, Dick not only studied and treated objects in the museum’s collections, but also worked alongside James H. (Tony) Frantz (M.A./Certificate in Conservation, 1975) to professionalize the department. Together they built one of the foremost conservation departments in the world, renowned for the expertise of its conservators and scientists, for its technical and scholarly output, and for the conservation and preservation of the Met’s permanent collections and numerous loan exhibitions.

Dick taught art history at the former Heights campus of New York University while still a student, and later at John Jay College in Manhattan.  Institute Professor Emeritus Norbert Baer remembers a story Dick liked to tell of the policemen in his course removing their gun belts and slinging them over the desks at the start of class.  Some of his most influential teaching, however, was at the Institute of Fine Arts, where he taught an annual course on the materials of art and archaeology from 1986 until 2011. Class after class of art history students will recall how he stood at the front of the room, rocking slightly back and forth while producing a flawless stream of information on the materials and process of art making to accompany his slide presentations.  Technology, he argued, is by necessity a part of style; the technical choices an artist makes have a large impact on how a work of art appears, and art historians and conservators needed to understand this. Even better than his classroom lectures, though, was to look at works of art in person with Dick and see through his eyes.  His discussions of the Rospigliosi Cup and other fakes and forgeries he had helped unmask at the Met, with the objects there before us, were riveting.  Peter Bell (Ph.D 2017), his student and later colleague at the museum, considers Dick’s course “completely transformative” and credits him with changing how he thinks about and studies the history of sculpture. Peter writes: “it will be hard for many of us to adjust to a world where we can’t just ‘ask Dick.’” This feeling is widely shared among his many students and those he mentored; even more, perhaps, is our sense of loss of a generous colleague, gifted storyteller, and kind friend.  He is sorely missed.