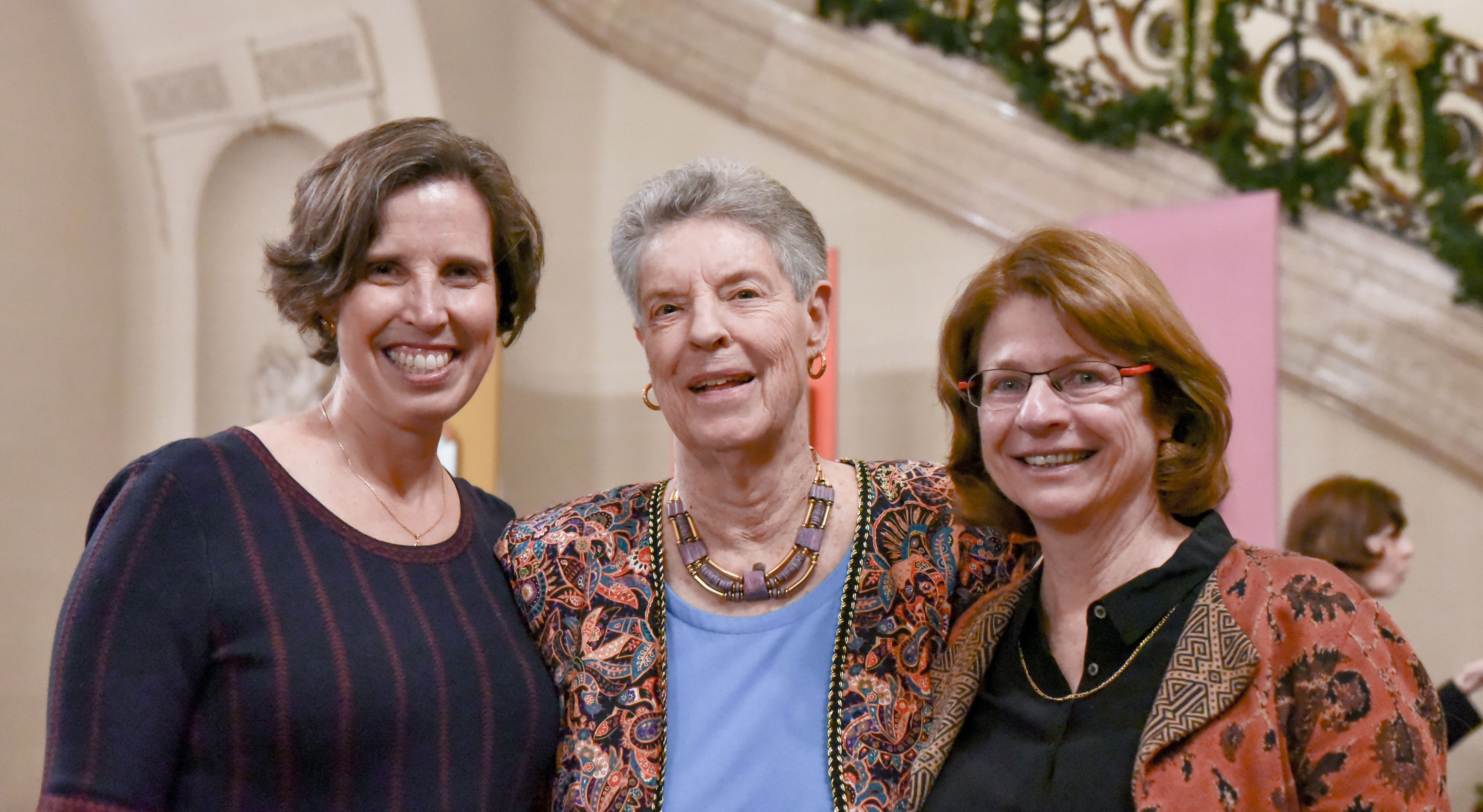 I am a little intimidated by the illustrious group of speakers that will follow me this afternoon. I think you’ll hear about my father’s academic and professional accomplishments as well as his leadership and mentoring abilities. I want to share a view of my father that will no doubt overlap but that speaks to what a wonderful family man he also was.

When I’ve thought about what I might say today, a kaleidoscope of images has come to mind, set in Athens, on Samothrace, in Princeton and even in far flung places like the Galapagos. Many of you will not be surprised to know that many of those memories center around food and cooking. I can picture him in our kitchen in Princeton, of course in jacket and tie or maybe even a suit and tie, but with his Lee and Perrins Worcestershire Sauce apron covering the front, busily making Thanksgiving dinner, always with the stuffing recipe from a 1970’s version of Gourmet magazine. Then there was the fantastically carved watermelon basket, filled with fresh fruit, that he made for a birthday picnic on the beach, despite the fact that he likes neither fruit nor beaches. Another picture comes to mind of him in another kitchen, in my house in Maine, patiently making his buttery shortbread recipe with my then three or four year old son. He was an understated master in the kitchen. Karithopita, decadent and delightfully fudgy brownies, garlicky lentils, roast beef, and even the occasional chicken Kiev. All of these make me think of my father. Once we moved back to the US, he was fond of saying “I’ve never been to McDonalds” whenever we saw those familiar golden arches. Knowing how many McDonalds there are across the country, you can imagine that this was a fairly frequent saying. And yet he was good natured about my insistence on taking him to one so that he couldn’t say it any more. I’m a little sorry that I took that away.

During my time in Athens I had a child’s eye view of my father’s time as director of the American school. We moved there when I was five months old. Perhaps my perspective will round out some of the other things you’ll hear here today. I remember sitting in my bedroom at night looking out the window and down on the lantern-lit parties, watching my impossibly elegant parents mingling among the guests at a party on the terrace. He may not have viewed himself as a sociable human being but he was a generous and wonderful host, he and my mother often thoughtfully discussing the best seating for a dinner party so that just the right people would be seated next to each other.

Meanwhile memories of family dinners in that dining room in Athens include his patience and humor when I insisted on peeling each and every grape for him one day and his making up a song (often thereafter repeated) when I complained about the gristle in some meat. Or, there was the lunch on Samothrace when I – as a twenty-something – decided to sit in my father’s spot at the head of the table, much to the amusement of the students there that summer. He came around the corner – you can probably picture him in his full khaki outfit, pith helmet in hand – and tipped me out of my chair without missing a beat. Back to Athens and its surroundings, there were family picnic outings, sometimes to an ancient or more recent sight or sometimes just to fly kites. These were accompanied by a proper picnic complete with a wicker hamper that stored plates, glasses and real silverware. He was also a protector, diligently checking my room for spiders each night on Samothrace, even though I think he liked spiders even less than I and, after I saw a James Bond movie, checking my closet nightly to be sure that the henchman Jaws was not hiding there.

As I think back, there were some real paradoxes with my father. After all, he was a field archaeologist who was not a big fan of the great outdoors. At the end of each summer, the only tan he had was on his hands and his neck. He was a homebody who disliked travel, annually dreading the trip to Greece for the summer and then equally dreading the trip back to the US. And yet, I think there’s a picture in the slide show of my father staring down a red footed booby during a family trip to the Galapagos. The trip may not have been his idea, but he took it in stride. He steadfastly opposed sporting activities yet when my brother was in boarding school in Massachusetts, took a downhill ski lesson in 10 degree weather with a ski instructor who insisted on calling him Jimmy. In short, he was so much more flexible than he liked to let on.

Of course these are a scattering of memories and give only a glimpse of the way he shaped our family life. But I’ll close with some life lessons that I learned from him.

First: don’t bleed on the marbles. My first job was painting numbers on 5th century BC blocks. Part of the training for the job was to understand that if I cut myself, I was to move quickly away from any marble blocks.

Third, the absurdities of life deserve a good chuckle.

Number 4: always volunteer to take the minutes because then you get to decide what happened in the meeting.

Number 5: if something is worth doing, do it properly and completely, but don’t be afraid to think differently about it – for example, I never understood the science behind it, but there was the flame throwing solution that my father came up with to combat the roots invading the plumbing in the Samothrace house.

Number 6: always use the English language correctly. The opening to Star Trek (the original), which my father and I used to watch together over dinner, sadly contains a split infinitive: To boldly go where no man has gone before…Almost every night, my father would tell me that is should be “To go boldly”

Number 7: when something isn’t working, always begin by asking yourself “Why am I wrong?”

Number 8: if you want a really good dessert, it’s worth the effort to make Julia Child’s mousseline au chocolat – and you’d better make a double recipe.