It is an honor to be invited to join in remembering the life of James McCredie, particularly given the very many lives which he touched and deeply influenced. Others more qualified than I will praise his scholarship, excavations, and enormous contributions as a skilled leader and administrator at the IFA and the American School in Athens. I intend simply to recall what sheer fun it was to be with Jim.

Jim and I were exactly the same age and overlapped at Harvard, both as undergraduates, although he graduated a year later, and as graduate students, Jim in classics and myself in law, both receiving our graduate degrees in 1963.

I think perhaps my first long conversations with Jim were on an American School tour he led to northern Greece, Thasos and Samothrace. I recall asking Jim whether we could make a brief stop at the important prehistoric site of Dikili Tash, which lay right on the route of our tour bus, but Jim said there was no time, as we had to catch the weekly ferry for Thasos, before proceeding on to Samothrace. However, as we were passing Dikili Tash, he suddenly handed me the microphone without warning and announced that I would describe and discuss the site. I was just beginning my studies of archaeology then, but somehow stumbled through a brief description. Machteld Mellink, who was on the tour, kindly told me that I had done a good job, which could only have been true if making generous allowance for the circumstances.

Eventually we reached Samothrace, where Jim managed to excavate the entire Sanctuary of the Great Gods on a cleanup permit. This feat was a prize example of what became known as McCredie’s Law of Clean-up Permits, which states “the more remote the site from Athens, the more you can get away with.” Jim also built for himself the first western style house on Samothrace. When he arrived one summer to inspect the work underway, he discovered that the workmen had put the light switches in the various rooms quite a distance from the doorways. When Jim explained that light switches belonged near doorways to facilitate entering a dark room at night, his comment, according to Jim, caused great excitement among the workmen, who agreed that this was a splendid new idea. Jim also imported the first western style toilet ever seen in Samothrace. The workmen marveled at it, and thought it so significant that they created a raised dais for it in the center of the bathroom. Jim had it uprooted and placed against a wall, but the area where the floor had been raised was still visible in the flooring.

Subsequently I had ongoing contact with Jim in his roles as the Director of the American School of Classical Studies at Athens, Chair of its Managing Committee, President of its Board of Trustees, and Chair of its Board (a post in which I eventually followed him). Jim was at first uncertain as to whether he would enjoy living in Athens and serving as Director of the American School, the appointment remarkably offered just six years after he had received his doctorate, and negotiated for a three-year term rather than a five-year term. He was, however, a great success and was reelected for a subsequent five-year term. When, having greatly enjoyed his service, he asked if his term could be extended two years, the Board on the recommendation of the Managing Committee said “no, you made your decision”. The fact that Jim was not always amenable to Managing Committee instructions may have played a role in its decision. Those were the days, long before the Internet, when it was not yet possible to micromanage the Director in Athens via email and telephone. Indeed, even international telephone calls to Greece were difficult in Jim’s day, for they were generally lost after 30 seconds to a minute, or if the speaker paused for a few seconds to think. Once, arriving in Athens just after the assassination of Mr. Welch, the CIA station chief, the taxi driver driving me in from the airport, having observed the sharp drop in the number of American tourists, asked, “Aren’t you afraid of the terrorists?” to which I replied, “No, I’m afraid of the telephones”, which sent the driver into gales of laughter. Accordingly, the Managing Committee had to send its instructions to the Director by mail, but the mails weren’t totally reliable either. Thus, when on two occasions Jim received letters containing instructions from the Managing Committee which he found annoying, he simply ditched the letters and pretended he had not received them. I should perhaps mention that I received this confession from Jim less than a year ago, when we were seated together at a meeting of the Trustees of the School, during one of our never-ending discussions of the respective roles of the Managing Committee and the Director of the School.

Of course I also had regular contact with Jim during the period when he was the Director of the IFA and I served as Chair of the Aegean Bronze Age Colloquium. The Colloquium was extremely active then. I remember in particular one session which Jim attended and we laughed about afterward, when Professor Yannis Sakellarakis came from Greece to present the remarkable results of his excavation at the Minoan shrine at Anemospilia, located at a bend on the path from the Palace of Minos at Knossos to the Minoan peak sanctuary up on Mt. Juktas, including the evidence for what Professor Sakellarakis believed was a human sacrifice. Over 70 people jammed the room, including Professor Dietrich von Bothmer who was accompanied by his pet schnauzer. Fortunately, the dog was extremely well behaved. Dietrich pretended he had been out walking the dog, noticed the lights on, and wandered into the IFA to see what was going on. Jim remarked later that at the start of the lecture he worried that the dog might bark, but watching Dietrich’s face as Yanni set forth his human sacrifice hypothesis, began to worry that the barking might come from Dietrich.

I also recall a question Jim posed to me while Director of the IFA, at a time when Professor Guenter Kopcke was on sabbatical, which he spent in Berlin. It was before Berlin became the capital of a reunited Germany, when the population was small, the cost of living low, and the city was largely inhabited by artists who enjoyed the low rents and government subsidies. Guenter sent ecstatic letters to Jim saying how much he was enjoying his sabbatical and the chance to use the open stacks in the great libraries and museums of Berlin. One day Jim said to me, “You know, Guenter is having such a wonderful time in Berlin that I worry he will not return. If that proves to be the case, could you jump in and teach a seminar on the Minoan palaces?” Fortunately, Guenter returned and I was never put to the test.

In sum, it was both an honor and a great pleasure to know both Jim and Mimsy, and one that will stay with me for the rest of my life. 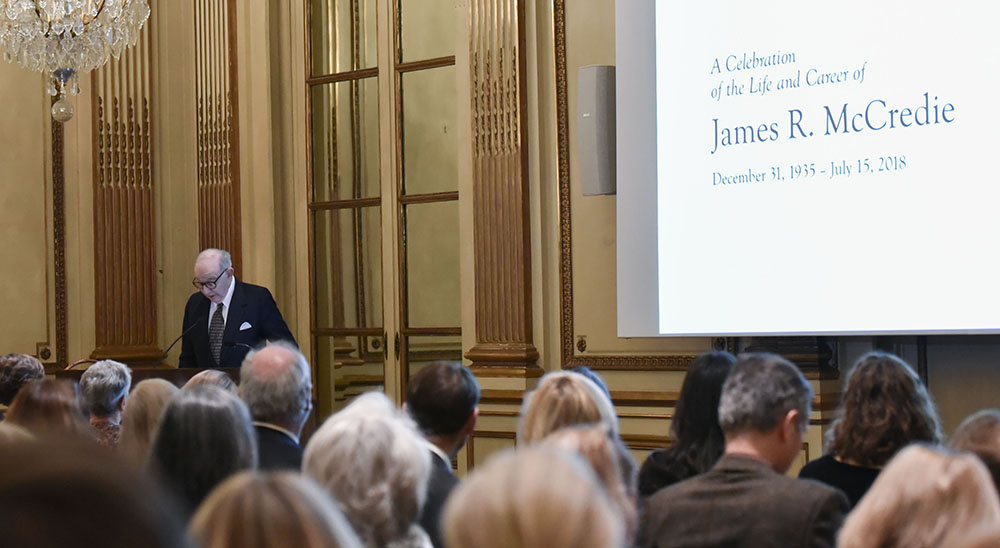 Malcolm Weiner delivering his remarks in the James B. Duke House on Decmeber 9th, 2018.