Many of the most amusing things Jim said to me over the years are I regret unrepeatable in public. Long before working for him, I knew the name J. R. McCredie as head of the American School in Athens, of the IFA, and of Samothrace. I had Hellenistic interests and knew his publications, especially the book on Military Forts in Attica – a masterful study combining literary texts, inscriptions, and a big archaeological dataset that makes archaeology do historical work. 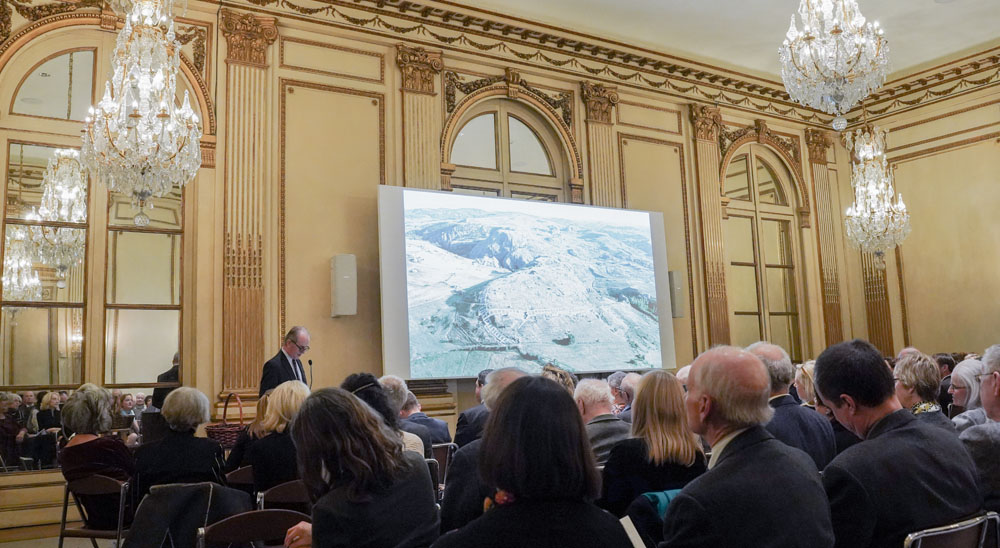 I first met Jim in 1985. I met him on the telephone, and the conversation captures some typical McCredie. During a post-doctoral fellowship at Princeton the year before, I had got to know Peter von Blanckenhagen, the IFA’s revered Roman art-historian. But I was now back in Oxford, contemplating the desert-like job-market of the mid-1980s UK. On the phone, Jim said: ‘I’m in London and am calling to ask if you’d be interested in coming to teach at the IFA for a year – Blanckenhagen is retiring.’ I said: ‘Mmm, well, yes, I would be,’ and I asked if I should come to London to discuss details with him. ‘That won’t necessary’, said McCredie, ‘Blanckenhagen says you’re to be tried for a year, and that’s enough. If you mess up, it’ll be only one year. If you do well, it might still only be one year.’

At the IFA I came to appreciate Jim’s dry humour, hard work, dead-pan manner, and his sense of public service. A lot that he thought worth doing for the institution and for the subject were things that had no personal benefit – an unusual idea that remains novel and fresh.

Jim hated self-promoters and flashy rhetoric. I learned a lot from him about my subject and about professional conduct: don’t speak too soon, don’t say too much, take nothing for granted, keep emails short, be on time. Jim carried being on time to great lengths. On trips to Ankara for Aphrodisias business, we’d arrange to meet at an agreed time in his hotel lobby before going on to the Ministry. I started to come earlier and earlier to see how early Jim came. I never found out: he was always there before me.

I learned of Jim’s view of public service in a typically indirect manner. At the IFA I sometimes thought I should have a pay-rise. I would draw Jim’s attention to the deeply learned articles I had written. Jim’s response was: ‘Oh, yes, I see, but really you’ve written enough already.’ It was not that I had written a lot, it was simply in Jim’s view there were other things to be done.

Many will know that Jim hated self-promotion, but it is perhaps less well known that he also practised extreme forms of self-effacement. The first point of entry to the archaeology of Samothrace for everyone is the superb Samothrace: A guide to the excavations. Its several revised and greatly enlarged editions have only one name under the title, Karl Lehmann’s. The name J. R. McCredie appears only as editor below a short revised preface. Almost the entire revised book however consists of Jim’s work and Jim’s words.

Another example: When we started at Aphrodisias, the excavation house garden was full of marble statues and reliefs of extraordinary quality. We planned a large depot for them, and after a brazen theft from the garden it suddenly needed to be built with urgency. I explained the situation to Jim, who simply said ‘we have to do it’. It was built in one year and is the envy of all classical sites in Turkey – a large functional store and workshop, called the Blue Depot. The ninety life-size imperial and mythological reliefs from the Julio-Claudian Sebasteion were restored here over about ten years and then installed in a new museum on the site in 2008. The workshop was then used to prepare the architecture for the anastylosis of the Sebasteion’s south building.

The depot-workshop is a vital part of the Aphrodisias project. The door has a bronze plaque on it saying it was sponsored by the IFA, but this is not true – Jim paid for it himself. Many Aphrodisias budget meetings ended with Jim saying, ‘Well, it’s expensive, but I suppose we’ll have to find the money somewhere.’ He was a man of extraordinary generosity.

I got to know Jim best through Aphrodisias and trips to Ankara to solve knotty diplomatic issues. Here Jim was in his element, by turns poker-faced and intensely charming.

After the death of Kenan Erim in 1990, not a few archaeologists felt they should take over Aphrodisias from NYU. It was and remains a spectacular site. It turned out in 1990 that the only person who was both on Erim’s team and based at NYU was me. The project was a big NYU responsibility, and Jim wanted to see the right thing done by it. He never talked about it explicitly, but I guess he calculated it was to be Smith or the site was to go somewhere even more unsuitable. I was, it should be confessed freely, an Assistant Professor with no field experience of the kind required. It was a gamble and testimony to Jim’s diplomatic know-how that he was able to get Ankara to agree to such an unpromising new director.

Jim arranged a series of meetings around the Turkish government, defused objections with charm and unexpected jokes, and lined up the US Ambassador to Turkey – a kind of deus ex machina – to attend the final meeting with the Minister. The matter was quickly sealed. Jim is the reason Aphrodisias came to the IFA in 1991.

Finally, our Boğazköy adventure. After those first Ankara meetings in December 1990, we had a spare day and decided to visit the great second-millenium Hittite capital at Boğazköy, some 2.5 hrs east of Ankara. It was December and well below zero. Jim hired a car. He would drive. You need to imagine both car and clothing. The hire-car resembled a soviet Lada, a kind of square-shaped cookie tin on wheels, without heating. Jim wore as always a pin-stripe suit, neck-tie with gold pin, and thin rain coat – no gloves, no scarf. There was a lot of ice on the road. We hit one large patch of ice early on and nearly skidded into a ravine. It was entirely typical that neither of us commented on this near-death experience. Jim simply went more slowly.

We reached the site after four hours, in the early afternoon. We examined the magazines and temple complex in the lower city and drove to the upper city – it’s a huge place. We parked on a steep dirt road (no asphalt then). When we returned to the car after visiting the acropolis walls, it was starting to get dark. We were both frozen to the bone but of course did not mention it. We found one of the car tires was completely flat. We set about changing it, but after some effort it was clear it was not possible: the steep slope and the primitive Lada jack defeated strength and ingenuity. I had visions of dying an early frozen Hittite death. Without panic or swearing – the most Jim said was ‘Oh dear!’ – we drove on the flat tire and metal wheel rim at 2 mph for an hour, to the nearest town and garage. We returned safely to Ankara a lot later than intended.

This was the first of several memorable trips with Jim. In shorter exchanges between longer silences, I got to know him quite well. I wrote to him this time last year, with the report of our Aphrodisias season, and asked if he would be around when I came to New York. He replied, as always, immediately. He wrote as follows:

Dear Bert, Sorry to say I can no longer make it to NY.  Emphysema keeps me housebound.  Thanks for the report.  I think we did a good thing. As ever, Jim.

A typical email, the last I had from him. I had a great affection for Jim: he took a considerable chance with me in 1986, and gave me a wonderful start. I miss him a lot.