I didn’t arrive at the Institute until after Professor McCredie had “retired.” He was emeritus when I showed up. He wasn’t teaching courses, he wasn’t advising doctoral students. His office was at 3 East 78th. None of this sounds like a recipe for Professor McCredie’s having become an integral part of my experience at the Institute. And yet he could not have been more important to me as a teacher and mentor. That I consider him so essential to my graduate and professional career is a testament to how avidly Professor McCredie embraced the role of teacher and mentor, and how good he was in those roles. 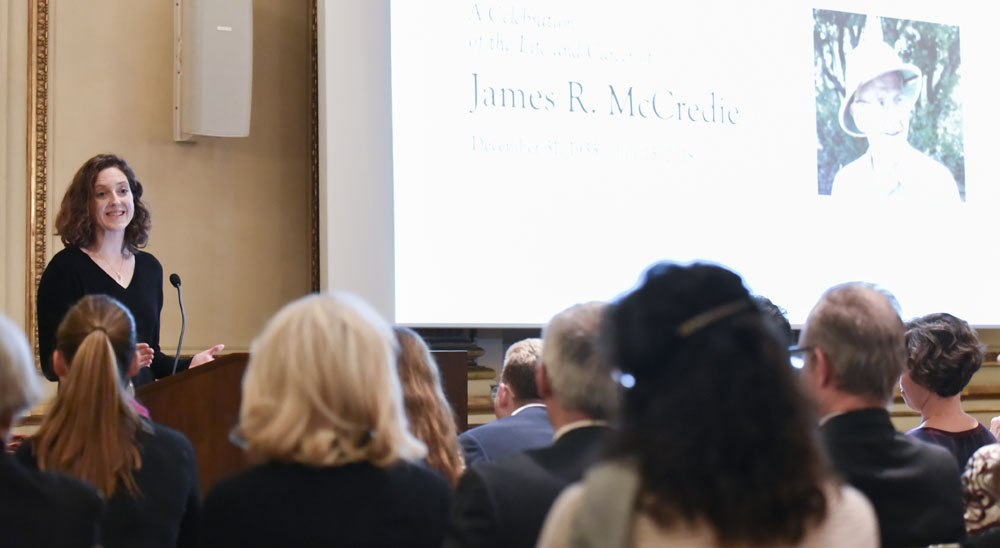 Clearly, when Professor McCredie “stopped” teaching, he didn’t actually stop, not even close. My first real encounter with him was when, on the advice of an older student, I randomly asked him if he would meet with me informally over the course of a semester to talk about Hellenistic architecture. He responded not by meeting with me a few times here and there, but instead by organizing a weekly seminar for me and two other students, where we sat in the basement seminar room once each week and he told us basically everything he knew about Hellenistic architecture. He called these “lore sessions,” and they were indeed moments of passing tradition on. I still have the notebook that I wrote in during those “lore sessions.” It is my Bible of Hellenistic architecture, and I still today have it sitting within arm’s reach of my desk in my office.

Professor McCredie went on to read one of my QPs, examine me in Hellenistic history for my oral exams, and serve on my dissertation committee. He also invited me to Samothrace for the first time in 2008, which turned out to be one of those rarest of gifts: one that changes your life. Throughout all of these experiences, the constants were Professor McCredie’s kindness and wry humor, and the lessons, which he taught by example, that our work as art historians and archaeologists should be fun, and that it is the people with whom we work that make it so.

Professor McCredie could come across initially as a serious, formal person. He addressed me at first as Ms. Popkin. He always had his uniform on, a suit here or at ouzo hour in Samothrace, his dockers and pith helmet during the day at Samothrace. But there was a sense of play with him, a readiness to be amused. When I sat down for my oral exams, Professor McCredie went first. I was expecting some formal question about the development of the stoa or the political ramifications of the First Illyrian War. Instead, his first question to me was, “Who’s your favorite Hellenistic king?” This was such a perfect Professor McCredie question. It was whimsical, it put me at ease, and it showed his conviction that serious scholarship and serious conversation canbe, and shouldbe, fun. If you’re going to study Hellenistic architecture, shouldn’tyou have a favorite king?! (My answer, in case anybody is wondering, was Antiochus IV, and Professor McCredie’s question led to a lively exchange about Hellenistic Corinthian architecture.)

Professor McCredie’s kindness and humor were deeply intertwined; they were, I think, two sides of the same coin. He sent a good friend of mine the following email when he was deciding one year whether to bring some new IFA students to Samothrace: “Neither [of these students] is to be in New York, where I could count to make sure that each has just one head.  In this case I shall have to depend on your estimate of their collegiality.  Having nice people is as important as having bright people.” I still laugh when I read this and the image it conjures up of mean, two-headed IFA students trying to worm their way onto Samothrace. But Professor McCredie was not just funny, he was also right. Having nice people is as important as having bright people. One of Professor McCredie’s many extraordinary talents was that he, of course, managed to have both.

I think it’s because he actively sought out people who were smart and nice that Professor McCredie sits at the nexus of such an extraordinary network of family, colleagues, and friends. He forwarded me an email once from an eminent colleague whom he’d written to ask a question on my behalf about archaic Greek sculpture. He had begun his email to her with, “On the principle that it is not what you know but whom you know, I thought I’d ask…” Professor McCredie really believed that, that whom you know is as important as what. The title of his Festschrift, “Samothracian Connections,” couldn’t be more appropriate, because of the humandimension of the connections forged at Samothrace under Professor McCredie’s tenure as director. He brought wonderful people together on that island. It will never cease to fill my heart with joy to think of sipping ouzo and eating dinner overlooking the Aegean with Professor McCredie, sometimes eating brownies that he himself had so thoughtfully baked for us, while he told stories of Samothracian escapades of seasons past, with some of the best people I know. My closest friends from graduate school, my most cherished colleagues, my most supportive mentors—the people who have made and continue to make my scholarly and professional accomplishments possible—they are all people I got to know because of Professor McCredie, either here in New York or at Samothrace.

And at the center of that amazing network, supporting us as students and later as emerging professionals, was, always, Professor McCredie. As I was looking back over emails from him for this tribute, I have to admit I was mortified to realize just how many favors I asked of him over the years: for recommendations, for random pieces of information about Greek architecture, for help securing summer funding, you name it. He said yes to every single thing. When I was on the job market after I finished my PhD, he wrote personal emails on my behalf to every institution I was applying to where he knew somebody. He didn’t have to do this. He wasn’t my advisor, he wasn’t my official recommender. But he did it. And not only did he write those emails, but he also—and I love him just as much for this—he also forwarded them to me after he had written them, so that I could see the nice things he had said. Professor McCredie knew that at a stressful time like being on the job market, we can all use a little kindness and we can all feel boosted by knowing that somebody we admire deeply thinks well of us in return.

Because Professor McCredie was such an extraordinary mentor and teacher, because I didadmire him so deeply, his approval meant a great deal to me. And so, when I finished my PhD, I enjoyed all the wonderful traditions of celebration here at the Institute, from getting my glass of sherry at my defense to being hooded at Lincoln Center by Professor Soucek. But none of these compare to what is still one of the proudest moments of my professional career, and that is the moment after graduating when I got my first email from Professor McCredie that was signed not“As ever, JRMcC,” but instead, “As ever, Jim.” To be considered a colleague by Professor McCredie—that felt as though I had truly arrived.

I’m not the only person who feels that way. I know that many of us in this room, and many people who wanted to be here today but could not, believe that becoming Professor McCredie’s colleague was one of the greatest rewards of our graduate studies and know that we owe so much of our success to him. One summer, when Professor McCredie was machinating to find money to bring me back to Samothrace, he finally told me to go ahead and apply for IFA summer funding. “I think,” he said, “I have arranged for you to be successful.” I’m here to tell you that for all of his students, he did arrange for us to be successful, in so many ways. He really did. We are the lucky ones to have had him as a teacher and a mentor, and for that, we are—I am—profoundly grateful.