Thank you for inviting me to offer a tribute to Professor McCredie. I should start by saying that, try as I might, my brain simply won’t permit me to call him anything but Professor, so thoroughly did he embody that role of a learned teacher. 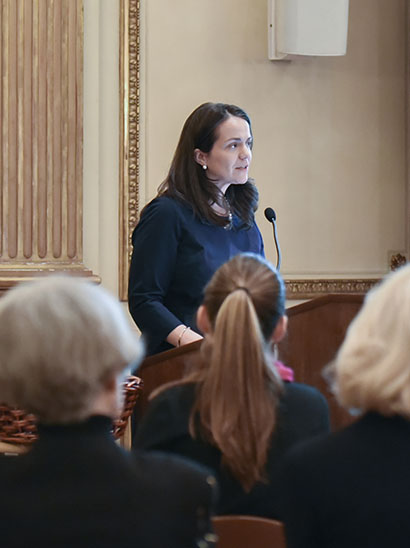 I should also say that I am not an archaeologist and I do not pretend to possess the qualifications to speak to Prof. McCredie’s exceptional impact on his field. Nevertheless I count myself lucky to have come to the IFA in 1999 during the “McCredie years.” I have also been extraordinarily fortunate to have been invited to join the excavation at Samothrace in the summer of 2002. There I was one of a lucky group of students piling into the back of Sylvester, Prof. McCredie’s bright orange VW thing, and riding across the hills of a magical Greek island. I enjoyed many direct, but never terse, dinner conversations on the terrace at Samothrace about topics as varied as Latin etymology, land management techniques in the Northeastern United States compared to Greece, and the varying effectiveness of bug sprays to keep centipedes from your shoes. Professional tip: just use the poison. I still have a goat bell, hanging from a door in my home that reminds me of the melodic tinkling of bells on Samothrace. I suspect one or two of you may treasure that sound similarly.

From these moments and experiences, I watched and learned a great deal. About work, about a particular type of independence, or really, reliance on one’s own ability and intelligence, about citizenship – belonging to an organization and contributing to its health -, and about kindness. Today, I would like to share some reminiscences – my own as well as from fellow students – on these topics as a tribute to our Professor.

I first encountered Professor McCredie in exactly this room. He was standing at this podium, or one very much like this one, addressing incoming students. I’m sure some of you can conjure a similar image. And no doubt some of you can also recall him telling the story of how the IFA came to be. The institutional history of the place was an important topic to Professor McCredie because it imbued students – from their first days here – with the feeling that they were, they are, part of a larger project. We were joining the community of the Institute, but on a broader scale we were also beginning to participate in the development of art history in the United States.

Prof. McCredie modeled professional citizenship, tending to the health of the Institute in ways big and small. One student I spoke with in preparing for today, remarked that whenever she needed a form signed, he always completed it by 6am the very next day. He served as an impromptu member of more than a few dissertation committees. An IFA graduate, Karen Leader shared with me how, after the events of 9/11 in 2001, when a group of students came to him, wanting to organize a symposium, he simply said: “What do you need?” Then provided the space to make it happen. More than a few of us can thank his efforts to support students for our chance to pursue advanced degrees in art history. I am deeply grateful for this chance and for his support.

As a teacher, Prof. McCredie combined erudition and humor. Another IFA graduate, Jennifer Udell shared her memories of studying Greek architecture and history with him to prepare for her oral exams. She described how they would meet once a week in his office in the building next door. Soon other students heard about the chance to learn from Professor McCredie and began joining in – so many that the group then moved to the seminar room in the Duke house. The sessions were a combination of architectural/topographical study and archaeological/historical exploration with a healthy dose of gossip. In Dr. Udell’s words: “It was amazing.” On a few special occasions, she recalled, he brought his impossibly rich brownies. Her favorite reminiscence, in her words: “When it came time to discuss the format of the exam he assured me he would not test me on the various theories surrounding the Dörpfeld foundations. Naturally, this was the first slide he showed during my exam.”

During my own first semester at the Institute, I remember arriving at the building most days before 8 am to attend a German class in the basement seminar room. This was not my favorite part of the week. (The problem wasn’t the German, it was the hour.) And I noticed each morning, that Prof. McCredie was always already at his desk, ready for the day’s work. Any impulse I might have had to arrive late, much less to complain, was silenced by his consistent, cheerful presence. The lesson was essential: do the work. Remember how lucky you are to do this work.

I know that I am not the only student who heard the simple, direct, and ultimately true phrase: “I’m sure you will figure it out” from Prof. McCredie. It’s ingenious and extremely effective. It conveys a push to the student to rely on their own intelligence and abilities, together with a reassuring confidence in those abilities. One current PhD. Candidate, Madeleine Glennon described writing to ask Prof. McCredie about some photographs of a collapsed and repaired Roman wall in the Nike Precinct at Samothrace. She remembers him responding with a characteristically direct response, saying he had no memory of the repaired wall, but he was confident she would figure it out, which she did. In her words, his answer “encouraged me to work harder and come up with my own interpretations. He never pretended to have Samothracian omniscience, but I bet he did.”

And finally, in conclusion, the most common refrain I heard in talking with past IFA students about Prof. Mc Credie related to his kindness – in everyday situations and in moments of genuine need. He demonstrated this kindness in small ways – for example, in his willingness to “take a look” at an errant laptop or to bring a computer lab printer back to life to save a student’s deadline. And he also demonstrated it in big ones. Over the course of earning a PhD nearly all students encounter some sort of major setback or crisis. One student shared that she never expected to find such humanity from someone in his position. This afternoon, I speak for a large group of students who experienced that kindness, who watched and learned from his dignified, cheerful approach to work, and who were buoyed by his confidence in us. We are so grateful.