I am honored to offer remarks on behalf of the faculty, students, graduates, and staff of the Conservation Center. While many words come to mind when describing Jim McCredie - decency, loyalty, integrity, and civility, to name just a few - Jim’s actions spoke louder than his words. And Jim’s words tended to be carefully measured in both number and manner of delivery. With this in mind, I would like to share with you a few examples of how Jim’s actions belied a man who never wavered in his support of the programs and, more importantly, the people of the Conservation Center. 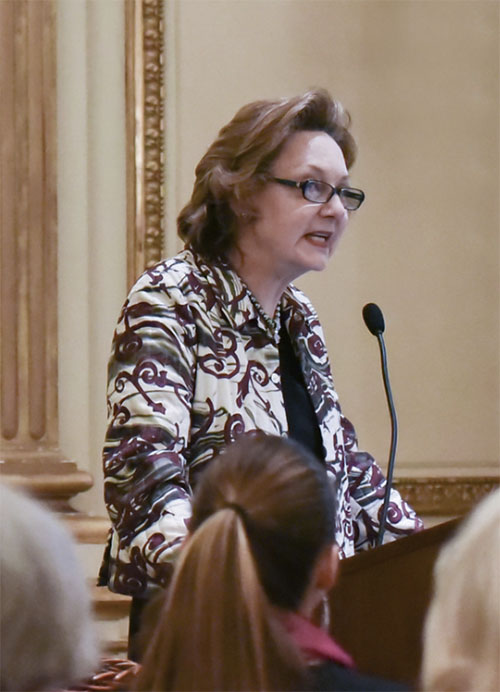 For those in the audience who may not know our history, the Conservation Center was originally located in the basement and cellar of this grand house. In the late 1970s, a townhouse diagonally across the street had been designated as our new home with Norbert Baer admirably and bravely guiding its innovative architectural design and construction. The lengthy project of gutting and outfitting the Conservation Center, however, lasted throughout the tenures of two Institute Directors, Jonathan Brown, and Richard Turner, with the leisurely pace of construction dragging on for so long that it fell to Jim, then incoming Director, to sort out the mess. According to Norbert Baer, he “forcefully” pressed the downtown Administration, “getting red in the face and loudly raising his voice,” so uncharacteristically as to bring an end to a prolonged struggle with a recalcitrant contractor.

Thanks to Jim’s persistence, not to mention extraordinary fundraising, the Conservation Center confers today not one, but two, of the most prestigious graduate degrees in the world. Our house across the street holds the equipment, faculty, students, and classrooms necessary for maintaining our leadership position in educating future conservators of cultural heritage.

My first real acquaintance with Jim occurred in September of 1986. It was, in hindsight, a far more auspicious event than I could have predicted. At the time, I was working at the Metropolitan Museum’s department of paper conservation. When Jim’s secretary telephoned to ask if the Director of the Institute of Fine Arts could come calling, it was mystifying and alarming, not to mention logistically difficult, since there was only one office space in the open plan conservation lab and it wasn’t mine. So Jim and I retired to the adjacent matting and framing room, where the photography darkroom was also located. There, perched on a high stool, Jim stated that he wanted to discuss a somewhat blunt letter that I had sent to him expressing my serious concern over the direction the Institute had taken in selecting the new Chair of the Conservation Center and the undue time that had transpired since the retirement of former Chair, Lawrence Majewski.

To make a long story short, Jim challenged my overwrought, but exquisitely worded, charge and said that if I was so smart I should throw my hat into the ring. Three months later, after successfully navigating the various stages required of candidates for Institute faculty, I was sitting in his office negotiating my start date. From then on, Jim had my back. Perhaps, in the beginning it was to minimize the enormous risk he had taken in reaching out to a young, inexperienced female conservator of prints and drawings to lead the Conservation Center. But as everyone knows, Jim’s high and unspoken expectations were very effective motivators for personal and professional growth.

In 2001, Jim again placed his trust in another young conservator, Michele Marincola, to assume the Chair of the Conservation Center, which she went on to do superbly, not to mention serve as Interim Director of the Institute from June 2008 to September 2009.

As an objects conservator, it was only natural that Michele would oversee the many waves of conservation students sent every season to archaeological excavations in Greece, Turkey, Italy, and Egypt. She recalls that it was not only Jim’s enthusiastic endorsement but often, his financial support as well, that provided invaluable on-site experience for conservation students. And, I must note, that Jim’s generosity and desire to share Samothrace with others extended to Institute faculty, staff, and their spouses, meeting everyone at the dock with his stalwart Sylvester. It was at Samothrace that one encountered Jim’s alter ego and enjoyed his hospitality and considerable talents as a chef.

Jim’s concern for conservation students was shown in other ways, I would wager not known to anyone except Keith Kelly of the Academic Office. Some time ago, two qualifying papers were required of MA candidates with each paper read and approved by two readers.  For the conservation students this could present some problems, since their papers could be fairly technical and not fall within the usual fields represented by art history faculty. When faced with no willing or able second reader, I would often reach out to Jim, who was ever the good sport and ready to take on obscure (probably for good reason) topics. He even read, marked up, commented on, and approved one qualifying paper entitled, Glitter as an Artist’s Material?

I would like to close by describing one final gesture, a small one that for me will forever enshrine Jim’s personality. In 1999 the Archaeological Institute of America voted to bestow its Conservation and Heritage Management Award on Lawrence Majewski, my predecessor as Chair of the Conservation center, and my professor. Larry was extremely ill and Jim insisted that he personally confer the award upon his old friend and colleague. So on a cold grey November day, Jim and I drove to Larry’s home, The Parsonage, in Dutchess County. Larry was thrilled, more aware and animated than I had seen him in a long, long time. The AIA Newsletter photo captures his pride and happiness. Exactly two weeks later, Larry passed away with his coveted AIA award at his bedside.

The measure of the man, James R. McCredie, is through his actions. May he rest in peace knowing that our close-knit and loyal conservation community is grateful for them all.